Sarah Vowell is the New York Times’ bestselling author of seven nonfiction books on American history and culture.  By examining the connections between the American past and present, she offers personal, often humorous accounts of everything from presidents and their assassins to colonial religious fanatics, as well as thoughts on American Indians, utopian dreamers, pop music and the odd cranky cartographer. Her most recent book is entitled Lafayette in the Somewhat United States.

Vowell’s book, Unfamiliar Fishes is the intriguing history of our 50th state, Hawaii, annexed in 1898.  Replete with a cast of beguiling and often tragic characters, including an overthrown Hawaiian queen, whalers, missionaries, sugar barons, Teddy Roosevelt and assorted con men, Unfamiliar Fishes is another  history lesson in Americana as only Vowell can tell it – with brainy wit and droll humor.

The Wordy Shipmates examines the New England Puritans and their journey to and impact on America. She studies John Winthrop’s 1630 sermon “A Model of Christian Charity” and the bloody story that resulted from American exceptionalism. And she also traces the relationship of Winthrop, Massachusetts’ first governor, and Roger Williams, the Calvinist minister who founded Rhode Island – an unlikely friendship that was emblematic of the polar extremes of the American foundation. Throughout she reveals how American history can show up in the most unexpected places in our modern culture, often in poignant ways.

Her book Assassination Vacation is a haunting and surprisingly hilarious road trip to tourist sites devoted to the murders of presidents Lincoln, Garfield and McKinley. Vowell examines what these acts of political violence reveal about our national character and our contemporary society.

She is also the author of two essay collections, The Partly Cloudy Patriot and Take the Cannoli.  Her first book Radio On, is her year-long diary of listening to the radio in 1995. She was guest editor for The Best American Nonrequired Reading 2017.

Vowell was a contributing editor for the public radio show This American Life from 1996-2008, where she produced numerous commentaries and documentaries and toured the country in many of the program’s live shows.  She was one of the original contributors to McSweeney’s, also participating in many of the quarterly’s readings and shows. She has been a columnist for Salon.com, Time, San Francisco Weekly, and is a contributing op-ed writer for the New York Times.

Vowell has made numerous appearances on the Late Show with David Letterman, Late Night with Conan O’Brien and the Daily Show with Jon Stewart. She is the voice of teen superhero Violet Parr in Brad Bird’s Academy Award-winning The Incredibles, and its sequel, Incredibles 2, from Pixar Animation Studios.

Vowell was the president of the board of 826NYC, a nonprofit tutoring and writing center for students aged 6-18 in Brooklyn, from its founding in 2004 until 2014.  She is still a member of its advisory board, along with its sister organization in Los Angeles, 826LA.

Lafayette in the Somewhat United States 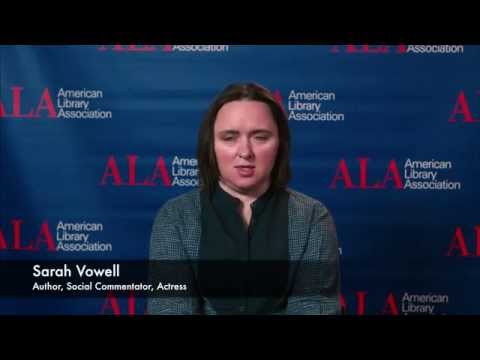 ALA Conference: Lafayette in the Somewhat United States 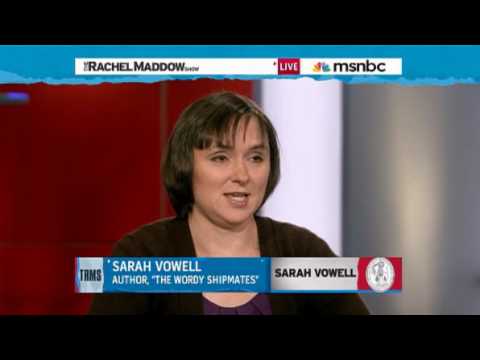 Clear+Vivid with Alan Alda: Sarah Vowell on Writing with Clarity (and Shenanigans) (2019)

New York Times: Did Hell Freeze Over? My Republican Dad Is Voting for a Democrat  (2018)

WFAE: A Conversation With Author and Essayist Sarah Vowell (2016) [audio]

The Brian Lehrer Show on WNYC: A Teenaged French General in the American Revolution [audio] (2015)

Fnews Magazine: Sarah Vowell, The Feminist Patriot of Our Time (2015)